I’m having a hard time writing an “objective” review of the latest book penned by my long-time friend Loren Niemi. It would have been easier to describe how useful to me as a writer have been his prose works on storytelling—The New Book of Plots and Inviting the Wolf In: Thinking about Difficult Stories. I recommend these to anyone who writes, or anyone who wants to live an engaged life and tell the truth about it.

A Breviary for the Lost is in another vein; it is a memoir in poems about a time of personal, spiritual, and psychological upheaval, within circumstances of political and moral challenge. I met Loren when we were both college students and he was a fledgling member of the Christian Brothers, a Catholic religious teaching order. The time we shared most directly was the late 1960s and early 1970s, although our friendship has matured and endured to this moment.

Loren’s book is formatted with first-person poetry providing the main, introspective narrative on the left-hand pages, and sidebars (numbered like footnotes) on the right-hand pages providing expansion and commentary in the third person. By choosing this inside-outside way of organizing, the author adds complexity and humor to his story. In sidenote [15] we find these lines: “Poverty/Chastity/and Obedience. He was good at/ One of them.”

A breviary is a prayer book, organized by the canonical hours beginning in the night and early morning (Matins and Lauds) and ending at sunset and end of day (Vespers and Compline). In case you’re curious, the poems that mention Jennie O. appear in the “first hour of daylight” (Prime) section.

I wonder if the “for the Lost” part of the title, refers not to the author, but those who were lost to war, lost to economic exploitation, racism, mis-education, faulty communication and just plain neglect. Loren did, of course, lose people who were important to him, both in the religious community and the political and artistic communities of which he became a part. He remembers them here and also in his volume of “ghost stories,” What Haunts Us (winner of a 2020 Midwest Book Award for paranormal fiction).

I recommend A Breviary for the Lost as an easy and insight-producing read. It takes you to unfamiliar and sometimes intimate places where you will be forced to question your own beliefs and aspirations.

The language of his poetry is deceptively simple. A favorite poem is about the young Loren finding a well-used pipe in the pocket of a winter coat donated to the brothers. He would return to that dusty basement “Just to smell the sweat of other lives/ and hold that pipe, trying to imagine/ who and what, when, and where/ it had been before it arrived at this/ pause in a Novitiate storeroom.”

Musings like this, ordinary as they seem, became the wellspring of subsequent stories, both easy and difficult, that have spilled from the keyboard, lips and heart of Loren Niemi. Check him out. 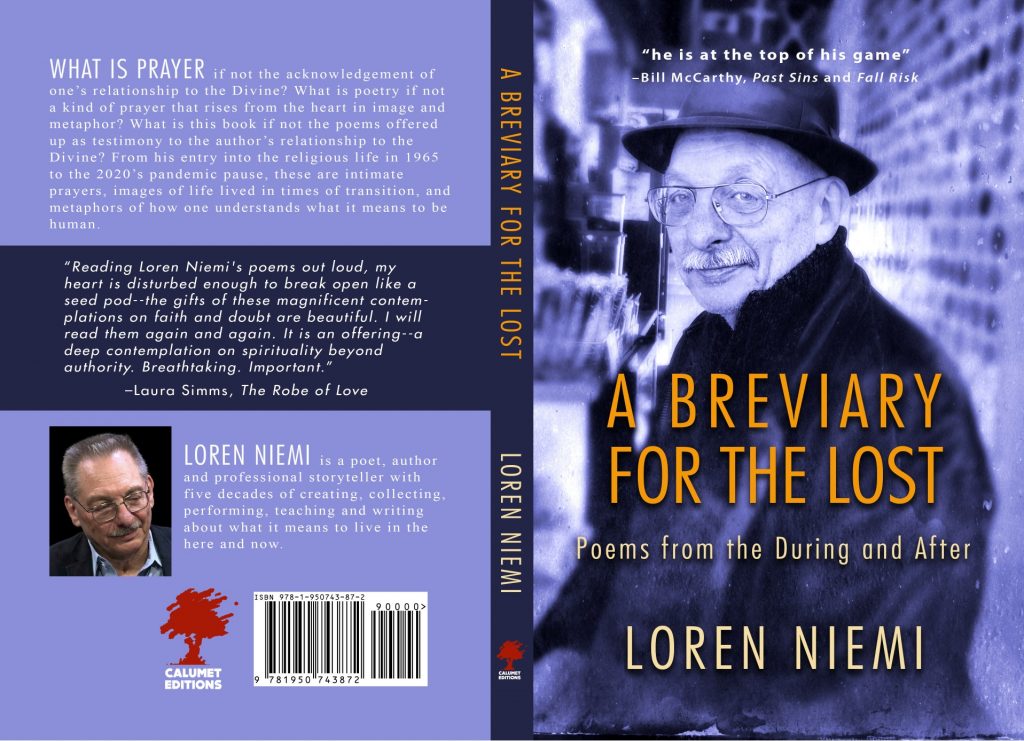 A Breviary for the Lost: Poems for the During and After. By Loren Niemi. Calumet Editions, Edina MN. First Edition July 2022. Can be ordered and subsequently reviewed at Amazon.com.

In Part 2 of this post, I will excerpt several sections from my 2012 memoir that tell a little more about my relationship with this poet, artist, professional performing storyteller, activist and teacher.