What people are saying about Jennie Orvino’s CD: Make Love Not War 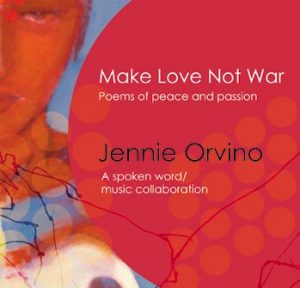 To purchase, go to http://www.cdbaby.com/orvino

In Jennie Orvino’s “Make Love Not War,” poetry and music combine into a rich, spicy musical-verbal stew, fulfilling as a good meal. Orvino is heartfelt but never sappy, sultry and sexy without being vulgar, equally passionate about war and love. Her musical collaborations are in a range of styles, each piece distinctive. Orvino performs her poetry: acts it, scats it, bats it about like the kittenish tiger she is, tickling and teasing in a juicy purr. Orvino is fearless as she steers from rooms of sexual ecstasy to lands of devastation. Salvation lies somewhere on the road between those two realms. She mourns the horrors of war, but in erotic passion there is hope for transcendence. Each informs the other: the consciousness of such horror brings intensity to love, and love is the only possible respite when bombs are devastating your home.

Eros is Orvino’s ministry, healing and redemptive. She personalizes the beseiged, becomes a warrior boy, wonders about those who were kissing for the last time before being buried in rubble. And in her poems, she loves as if each encounter might be the final collision of skin against skin. I’m finding that “Make Love Not War” is a good thing to listen to while driving. In Los Angeles, at least, you see humanity at its lowest ebb while passing it by enclosed in your bubble. The driver who throws his lit cigarette out the window, then veers in front of another car. The sad-faced woman at the bus stop. The sullen young man with his rap bass so up it shakes the car next to him. But then you let Orvino and her musicians take you over. The toddler runs in her yellow dress in a yellow field. A war-blasted landscape re-greens and re-animates. People kneel at each others feet, rubbing one another, as she puts it, like “deer at a salt lick.” You smile. You might cry. At home, you’ll reach for your lover. That kiss might well be your last. Make it sweet.

Oh, Jennie. MAKE LOVE NOT WAR: Poems of Peace and Passion makes me crazy. The whole presentation—your warming voice and performance, the caring fit of word to chord, especially evident in “Main Squeeze Blues”—heartens. How lucky the warrior whose peace may hang on the uplifting voice and lips of a poet-lover as warm and worshipful as you. Wow!

Certainly does start with a bang, doesn’t it? Make Love Not War is thoughtful and full of heart and there’s a beautiful vibe in the supporting music. I think it’s great night music.

Dear Jennie…I am awed by your poetry! Your wordplay and foreplay,  brilliant, searing images of pain pleasure…it’s heady stuff, but it goes right to the heart…you are so honest and alive!

—Antler, author of Factory [City Lights], Last Words [Ballantine] and many others

—from a review in The Shepherd Express (Milwaukee, WI)

I think it’s very provocative—in a good way—to mix the sex and war images. Surely sexual desire finds many forms of expression.Your poems feel brave and explorative, not judging or accepting common assumptions, but suggesting through implication and juxtaposition. It’s titillating on many levels.

—Daniel Cochnear, winner of 2000 Willa Cather Fiction Prize for Jobs and Other Preoccupations

On your CD I liked “Love in a Time of Tragedy” the best. The thought of your daughter walking out of that ash-covered day just gives me chills. Of the sexual poems, I think the way you allow the sacredness of sex a place in the poems is the most important thing about them.

It occurs to me that the culture is terribly polarized by puritanical and pornographic attitudes towards sexuality and I find Jennie’s work refreshingly free of both.

Jennie’s not riding a wave, she’s causing one, and it has a powerful cleansing action that the Maytag Man could only wet dream about.

Imagine the Love Child of Anais Nin and Molly Ivins. Orvino translates the wisdom centered in the body into compelling language that challenges our assumptions about how the world truly works. Who says down-and-dirty erotica can’t illuminate 21st century politics?

The artistry, the integrity of your voice, words and phrasing, your words mixed with just the right musicians… I’ve listened to Make Love Not War over and over again. Thank you for giving voice to what so many of us don’t have words for.

Both the poetry and the CD are magnificent, Jennie! Truly, in “Make Love Not War,” you have created a masterpiece of art, politics and sensuality in an exquisite weave of carnal and intellectual eroticism.  What a powerful and deeply satisfying experience.

I very much appreciate your art and enjoy your readings so much! You’re full of life without pretense. I love it.

Sex exists in the world, not apart from it. It’s sweaty and smelly; it’s spiritual in the profoundest sense of the word; and using it for love can be just the beginning of passion, not its end. Jennie Orvino knows that in her bones.

“It made me blush; it made my heart race.”