What came to mind was the phrase I learned in the 80s: “nuclear winter,” which was hypothesized as the result of widespread firestorms following a nuclear war. The soot injected into the stratosphere would block sunlight, resulting in darkness and cooling that would cause, among other things, crop failure and famine. That’s what the air/sky looks like. Our California Governor Newsom is saying he has no patience with people who deny global climate change now…Well, yes, for decades we have been warned. Unfortunately, the Gov is still awarding a tremendous number of oil and gas leases, keeping the fossil fuel industry thriving in our state. 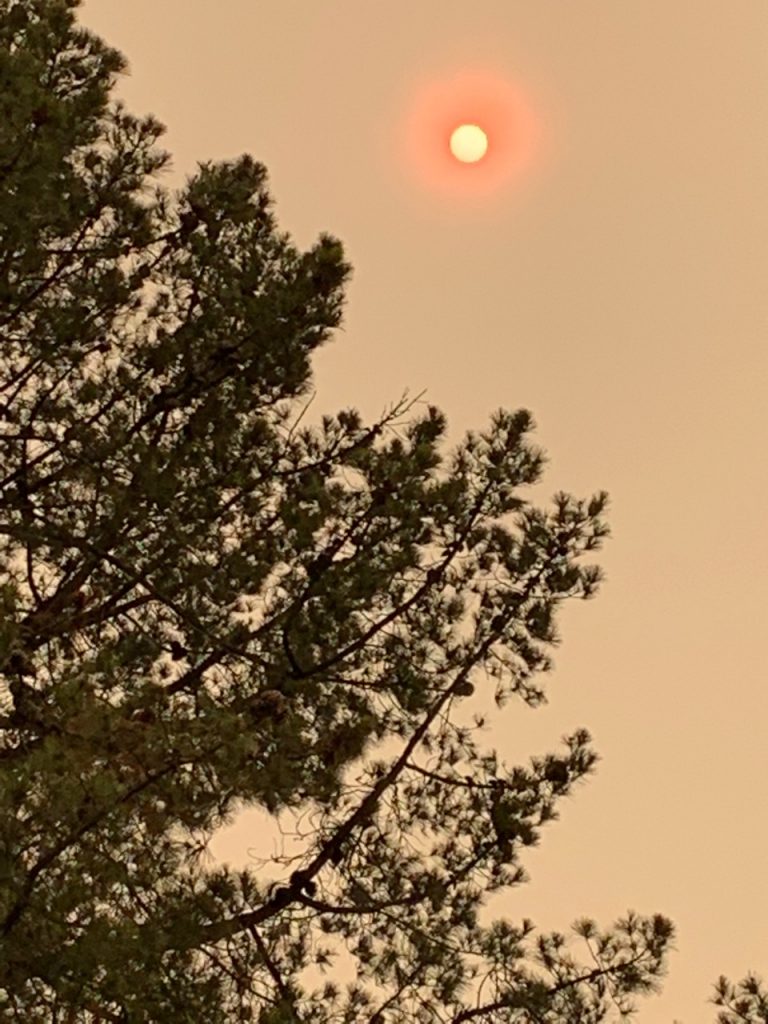 *
It’s official; the William Barr Justice Department has become Donald J. Trump’s personal law firm. In addition to misrepresenting the Mueller Report, reversing Roger Stone’s jail sentence, and firing prosecutors unfriendly to “the orange man” (I took note that in a speech, following his son’s being shot in the back by police seven times at point blank range, Jacob Blake’s father referred to Trump as “orange man” casually, as if that were his name), now the Justice Department wants to make us, American citizens, pay if a lawsuit brought by E. Jean Carroll succeeds.

Yes, the woman who accused Trump of raping her in the dressing room of a swank department store 20 years ago has a defamation suit in process. This maneuver by the Justice Department wants to move the case to federal court, which would make the U.S. government, rather than Trump himself, the defendant in the case. (See article in the Washington Post). As if we are not already paying in lives and treasure for the crimes of this – I’m running out of adjectives for the mendacious, vile, cruel, misogynistic—man, here’s yet another example.
*
Well, enough on that. On the side of comic relief, but also insight, let me recommend once again Trevor Noah and Stephen Colbert, who are using their platforms of late night comedy to educate citizens about democracy…and history. On a recent show, Noah did a terrific comparison of the current pandemic and the 1918 influenza pandemic. And still they make us laugh through our tears.

If you have never heard this wonderful singer/songwriter/political satirist, you are in for a treat, and again, a much-needed chuckle. I heard him perform in Occidental a couple of years ago and last night scrolling through Facebook at bedtime, I came upon his “Live from the Left Coast.” I urge you to check him out and contribute for the music. He said he’s doing a new Facebook Live mini concert every Tuesday. Right on his home page you can click and hear “Vote Him Away (the Liar Tweets Tonight).” I’ll admit he had me singing along, right there from my pillow.By the way, the address for his Metaphor Records is in Lakeport, CA.