But, let me share why I found two films I watched in the past week compelling and romantic (by definition, “dealing with a love affair, being heroic or mysterious, idealistic or adventurous”). Both films are French, bien sûre! And helmed by female writer/directors.

The first, released in 2019, Portrait of a Lady on Fire (Portrait de la jeune fille en feu) is a sensual drama set in the 18th century directed by Céline Sciamma, starring Noémie Merlant and Adèle Haenel. It won the Queer Palm and Best Screenplay at Cannes, but I didn’t know that before I watched it.

I was taken by this feature from an initial scene where an artist, Marianne, is riding in a small boat on very rough waves off the coast of Brittany. (The camera work put me in a seasick state.) Her bulky box of paints and canvas flips overboard and she dives in—shoes, long dress and all—to retrieve it. You know from the outset that this is a strong and determined woman. She arrives, saltwater soaked, at the remote estate where she has been commissioned to paint the portrait of Héloise, daughter of the house, who is to be married off to a Milanese nobleman.

Males appear in this film only as the dim sailors who deposit Marianne on the rocky shore. The servant, the mother, and the two young women carry the evolving story, riding on a stunning script. Steadily-evolving relationships among all the women surprise and move the viewer. A particularly stunning scene elevates the aftermath of an abortion into a visual akin to a religious fresco on a cathedral wall. I’ll say no more about Portrait of a Lady on Fire so you can fully enjoy it. If you can get a DVD, the extras provided are insightful.

After a few filmic duds, I chose to watch Queen to Play, (Joueuse), for the second time since I knew I would be satisfied. Directed by Caroline Bottaro, it turned out to be a good pairing with Portrait because of its focus on the character played by the extraordinary actress Sandrine Bonnaire.

Hélène, is a maid at a boutique hotel perched on an ocean-view cliff on the isle of Corsica. While making up a guest couple’s bed, she witnesses them playing chess on the balcony. Their interaction, seen through gauzy curtains, looks all the world like sexual foreplay.

A brief conversation with the female guest (who leaves behind a satin nightgown that Hélène appropriates for herself in a failed attempt to attract her husband’s nighttime attention) incites Hélène’s curiosity about chess. She becomes obsessed with learning, and “mastering” the game. “The queen is the most powerful piece.”

The 2009 film (streaming and on disc in 2011) had originally come up in my Netflix queue because I watched another story about chess and because was I was engaged in a string of Kevin Kline movie nights. Kline, speaking French throughout, plays a reclusive widower for whom Hélène cleans house. He becomes a mentor for the aspiring Joueuse d’echec and their growing relationship comprised most of the thrill for me in Queen to Play. 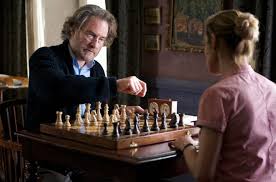 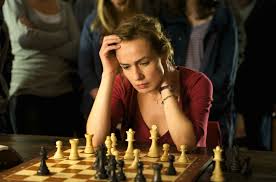 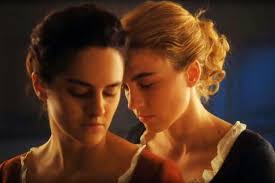