Along with watching and following  commentaries on the Ken Burns/Lynn Novick film The Vietnam War airing in episodes on PBS this week, I have been reading a 24-page, tabloid-size publication by Veterans for Peace. “Full Disclosure” is a print document and website created by the vets as “an effort to speak truth to power and keep alive the antiwar perspective on the American War in Vietnam. It is a clear alternative to the Department of Defense’s efforts to sanitize and mythologize the U.S. role.”

The paper I hold in my hands is full of scorching photographs and moving first-person, eye-witness testimony as well as analysis (“Lessons Learned and Not Learned” “Pictures from the Other Side” “Revisionist History”) and several pages of particularly heartbreaking “Letters to the Wall.” The veterans, many suffering from survivors guilt and PTSD, speak to their fallen comrades as they meditate before, or touch, the particular names engraved among the 58,000-plus on Maya Lin’s magnificent monument.

From 1964 to 1968, I was “safely ensconced” (as my father once said) at an all-women’s Catholic College. This was a most turbulent time for escalation of the war in Southeast Asia and resistance to it. My education began through exposure to the pacifist tradition through my political science and philosophy professors. My first real boyfriend was a draft resister who was tried and sentenced to prison in his home state of Minnesota. We were engaged to be married, but broke up during his 18 months behind bars. I was chastised on my graduation day by one of the nuns who administered the college as “not deserving to be in the honor society” because I “didn’t uphold the principles of the school.” She cited my participation in on-campus peace vigils and those “radical guitar masses” that were conducted in English instead of Latin. (If interested, you can find my memoir of the anti-war Sixties in Poetry, Politics and Passion, still available on Amazon.) 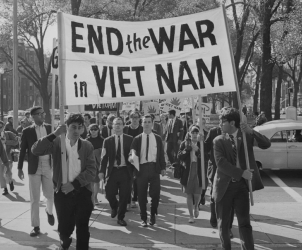 In the early 1970s, I did marry and have a child with a poet/draft resister, whose way of avoiding Vietnam was to fail his army physical by abusing his body with a cocktail of hallucinogens and meth several days prior. My brother-in-law suffered from PTSD as a result of his tour in Vietnam, and another friend lost his good health after being exposed to Agent Orange and jungle fungus. This is, of course, just a teeny fraction of all the pain the U.S. government failed to learn from.

Witness only the several invasions of Iraq, the 18-year war in Afganistan, and the non-stop saber rattling of our deranged, so-called president who threatens, on the floor of the United Nations no less, to destroy North Korea, a country of 25 million people. Please check out the articulate and brilliant interview with Jeffrey Sachs, professor and director of the Center for Sustainable Development at Columbia University, who was present for said remarks and described them as, “ Horrifying…there was a shudder in the room…the whole speech was grotesque, in my view…filled with grievance, with bias, with ignorance…He is individually a very dangerous man, and the United States right now is a very dangerous country.”

On this 50th Anniversary of what Veterans for Peace calls “the American War in Vietnam,” I hope you don’t turn from investigating its history as the Burns/Novick series continues to air. There are plenty of commentaries on both the Full Disclosure site and other places, like this one on Huffington Post.

Full Disclosure features beautiful and brave stories too, things that will touch and inspire you. 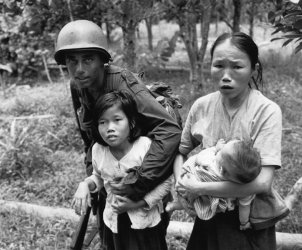