I’m heading to the East Bay this weekend to watch my grandson, a 4th grader, play soccer as I’ve watched him play basketball in season. But I never plan to watch him play football and I hope he never does.

A few weeks ago, I tuned in to a PBS Frontline documentary,“League of Denial,” which develops the story of the National Football League’s concussion crisis, and how the league crushed the reputation and livelihood of forensic neuropathologist Dr. Bennet Omalu who was the first to discover and name the neurological deterioration known as chronic traumatic encephalopathy, or CTE. The disease has been found in the brains of more than 100 former NFL players.

This story was movingly told, and, I thought, brilliantly acted by Will Smith as Dr. Omalu, in a 2015 feature film, Concussion. The dramatic thriller (quoting from the IMDB description) is “a true David vs. Goliath story of an American immigrant from Nigeria, whose passionate quest puts him at dangerous odds with one of the most powerful institutions in the world.” Dr. Omalu examined the body of popular Pittsburg Steelers’ center Mike Webster in September 2002 and noticed the anomalies that lead him to define CTE. It was a pleasure to “meet” the real Dr. Omalu in the Frontline piece, and very painful to see how his career was destroyed and his subsequent research discredited as he continued to examine the bodies of many other professional football players who suffered tragic early deaths, often by suicide.

A further shadow was cast over football for me in late August when a 17-year-old Fortuna High School football player collapsed during a game against our local Cardinal Newman team. The boy had a stroke, was put in a medically induced coma, and while he has been brought out of the coma, is still suffering the effects of brain injury. “No conclusions as to cause” have yet been drawn, at least in the articles I have seen.

On August 31, the New York Times reported that ESPN college football analyst Ed Cunningham resigned from the work he had done every fall for almost 20 years. The reason: his growing discomfort with the damage being inflicted on players. In good conscience, Cunningham, a former defensive lineman himself, said he could no longer be in the “cheerleader’s spot” for football.

Finally, I’ll refer to an op ed piece by Paul Gullixson, Press Democrat editorial director, a high school football player and lover of the game, who admits that “football as we know it” has to change.

…There’s no shortage of ideas of how to make the game and equipment safer. But most of it is just shuffling the deck chairs of a sinking ship. The sport has to change in some dramatic form…If not, the game may fade away on its own accord, a victim of increasing liability costs and decreasing participation. Studies show participation in high school football dropped another 3 percent nationwide last year and is down 10 percent over the past decade.

If change is going to occur, it’s certainly not going to come from the NFL, which begins another season today, a season that, despite the CTE concerns, is expected to generate nearly $14 billion in revenue, up more than 50 percent from just seven years ago. No, if change is going to come it needs to happen at the high school level and younger leagues. And it needs to start with the realization that we are entertaining ourselves by watching and encouraging kids to participate in a sport that puts them at tremendous risk — risks that we don’t yet fully understand.

The truth, as Gullixson concludes, should have everyone’s head ringing. 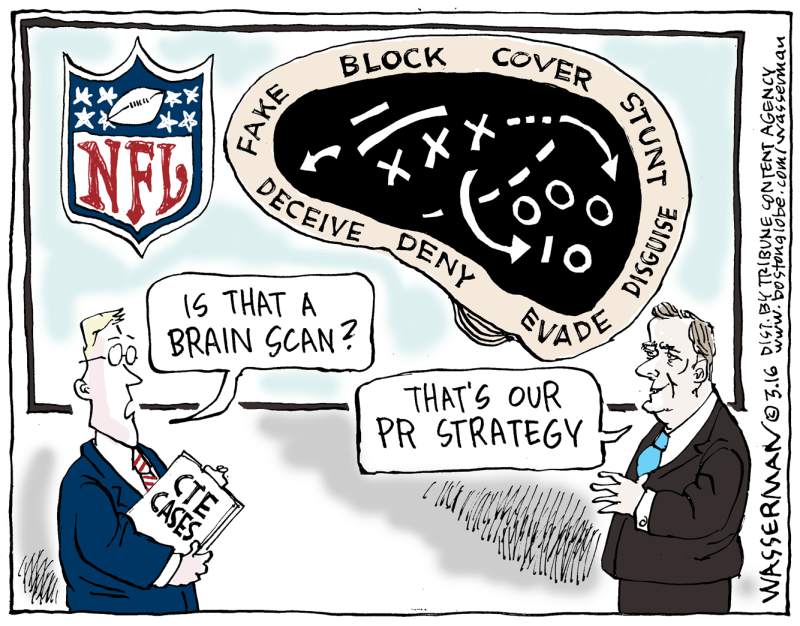