In the weeks from Thanksgiving to the eve of New Year’s Eve, circumstances have allowed me to watch more movies than usual. Taking advantage of a first month free subscription to Hulu, I was able to follow up on the 4-out-of-4-star reviews of Good Luck to You Leo Grande. For two and a half viewings.

With wry comedy and touching authenticity, they create a relationship over several encounters, including conflicts and surprises. The woman asks for what she wants (down to a creating a written list of never-before experiences) and a compassionate and expert professional facilitates her desires. But ultimately, Nancy learns that she is responsible for her own pleasure, her own big O.

It’s a shame this female directed and written twist on the rom-com is not more easily accessible, but you can read an accurate review in 50 Best Movies on Hulu and find a discussion about it on Joan Price’s blog. Watch Leo Grande trailers here. 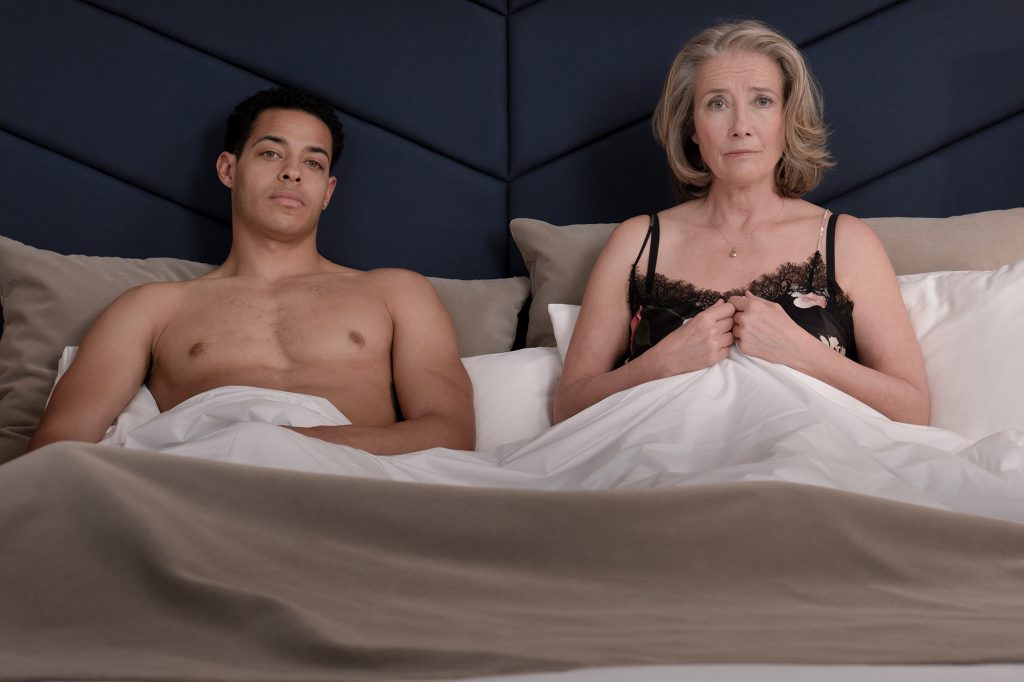 I don’t know what the fictional Nancy paid for Leo’s company, but I would gladly run up a considerable tab to have an evening with such a lover. I’ve thought of this possibility a lot over my 23 years of living single. More from sex educator Joan Price: “She wants transactional sex with a man who prioritizes her pleasure, who will serve her without his own agenda, and whose youthful appearance will turn her on.” Sounds good to me.

The next film I wanted to check out before the Hulu free trial ended was I’m Your Man, a German language film directed by Maria Schrader, starring Dan Stevens (British actor you might know from Downton Abbey, Beauty and the Beast) and Maren Eggert; it explores technology as a balm for loneliness and as a source of intimacy. This topic has been treated before in such films 2013’s Her.

I was interested in I’m Your Man  because of the premise: Alma, a researcher at the Pergamon Museum in Berlin agrees to be part of a three-week program where she will advise for or against the ethics of a new technology—the creation of lifelike robots algorithmically programmed to be one’s perfect partner. This is a leap beyond the gigolo experience! For Alma, her custom man is “Tom,” a handsome, witty, blonde specimen designed to evolve, through trial, error, and conversation, to become ever more aligned with her desires. We don’t get this background, but she undoubtedly filled out a basic requirements questionnaire!

Like the first film I talked about, I’m Your Man is an ideal romantic comedy, that, according to one review, “Hits the sweet spot of story, actor chemistry and tonal execution.” Tom’s initial programming has him prepare Alma a candle lit bath with rose petals, strawberries and champagne, as well as himself in a bathrobe waiting for her. When she opens the bathroom door, he says, “93% of German women find this exceedingly romantic.” She replies, “I’m in the 7%.” With the new information duly noted, Tom takes to the bath himself, sipping bubbly and tasting a berry.

What I found fascinating was both the ethical dilemma Alma grapples with, and the increasingly human characteristics of Tom as he adjusts his behavior to a stream of incoming data gleaned from his human interactions. When Alma attempts to use him when she is wildly drunk, he does not allow her to do so, “knowing” she will regret it in the morning. The scene ends when Tom tenderly tucks Alma, fully clothed, into bed.

Don’t we often hope that our spouses, lovers and friends will pick up on our clues or specific requests for the sake of deepening intimacy and harmony? For those of us who have been searching years for a romantic match, isn’t the idea of acquiring someone compatible at last, even if “artificial,” at least somewhat compelling? 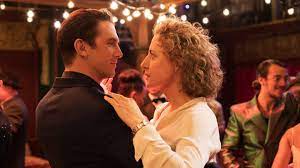 I loved how this deluxe model that was able to access a virtually endless database of romantic cliches gradually evolved to an exceptionally appealing and sophisticated companion. I’ll have to admit I was touched when Tom says to a woman in a bar who wants to kiss him, “You’ll have to ask Alma. I belong to her.”

Tom was not just a voice (as was the object of Joaquin Phoenix’s desire in the film Her) but a physical presence, seen as “nothing” to a herd of deer who surrounded him during a walk in the woods, but ever more emotionally and physically viable to Alma. “I don’t need to eat, but I clean my teeth and take care of my body,” Tom informs this woman who has reluctantly embarked on the experiment. In one scene, an angry Alma challenges Tom to show her how anatomically correct and functional he is. When he drops his pants in her apartment kitchen, she exclaims, “Is this supposed to be the c*#k of my dreams?!” He replies, “Apparently.”

Good Luck to You, Leo Grande and I’m Your Man were just two of the cinematic treats I enjoyed in the past month. A film-loving friend recommended another Hulu offering, the 2-part, Normal People, which put me through an emotional wringer and added Paul Mescal and Daisy Edgar Jones to the people I could watch day in and day out on screen.

Comments on my select list of narrative and documentary will have to be saved for 2023. Wishing for us all inner and outer peace in the coming year