I’m posting the article I wrote for our South Park Newsletter (Community – Collaboration – Change) as a way of promoting our Santa Rosa neighborhood “Ice Cream and Safety Social” on May 14 at MLK park, 1-4 p.m. Under a grant from the Community Building Initiative, we have been working for several years to strengthen the influence and power of our beautiful, diverse community. The cleanup day I describe below has happened at least four times before, and we have succeeded in curtailing sideshow type events and homeless encampments on our streets (at least for now).

DOING GOOD IN THE ‘HOOD

On Earth Day, April 23, a few dedicated South Park Coalition members and neighbors fortified themselves with coffee and doughnuts and set out with litter buckets and picker-uppers for our neighborhood cleanup. While the turnout was small, the effect was mighty in spirit, fostered by bilingual posters plastering our South Park streets and an email message that said, “If you cannot join us, please consider spending a little time cleaning up in front of your house. Every little bit helps.”

I thought the best use of my time commitment was to weed the roundabout at Pressley and Grand Avenue. For safety’s sake, I wanted to cut the tallest weeds and uncover the reflectors which were overgrown with rock roses.  I had worked up quite a sweat when neighbor Camille came by, pushing little Troy in a stroller. “Shall I send over my boys to help?” she asked.

Minutes later, Noah (age 11) tested my packed-full container of weeds and declared he could lift it. He carried it off to dump in the compost bin belonging to nearby neighbors.  Noah’s brothers, Odin (age 10) and Orion (age 7), helped by yanking up grasses and sweeping the trimmings around the circle. The four of us pulled and carried weeds until the compost bin could hold no more!

During our labors, many cars and trucks drove carefully around us, some drivers shouting “Thank you” as they went by. On Sunday morning, I put in some more time weeding and when I’d filled another two big containers, the three boys appeared again, offering to help. They carried the yard waste, bag of trash, and my tools back to my house. After I thanked them, Noah, Odin and Orion resumed their play in the street in front of their house. This is a very good reason for the cars driving by to pay attention and SLOW DOWN.

South Park Coalition thanks all our residents for observing the Earth Day Neighborhood Clean Up and showing care for—and pride in—our wonderful community. 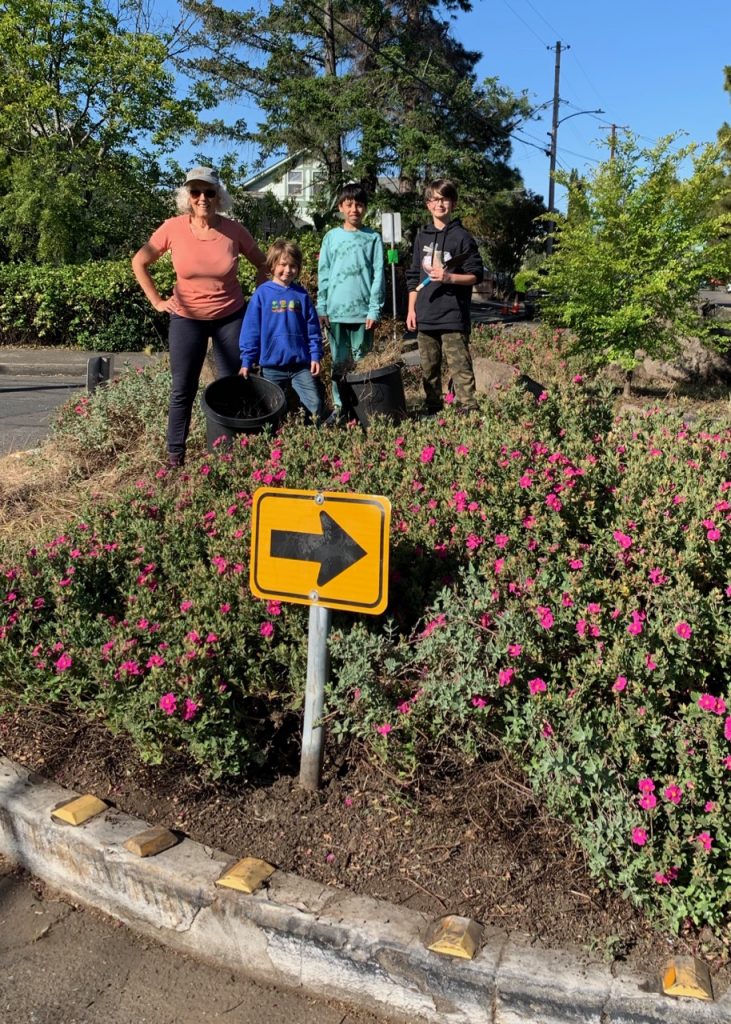