I’m not a soccer fan and didn’t pay much attention to the defending World Cup championship (USA vs. France match will be televised an hour from this writing) until the occupant of the Oval Office criticized team co-captain Megan Rapinoe for saying almost in passing, “I’m not going to the fucking White House.”

Like other winning athletes who have taken a knee or otherwise protested the policies of the current administration (Colin Kaepernick, LeBron James), Rapinoe is not guilty of the disrespect she is being accused of. She and her teammates, she says, “do not stand for a lot of things the current president stands for” including issues of sexism, racism and LGBTQ rights.

I encourage you to read the article by Dave Zirin, sports editor of The Nation, who makes the connection between Rapinoe’s stand and that of Muhammad Ali in the 1960s, when his refusal to go to war against the Vietnamese (“they never called me n_ _ _ _r”) destroyed his boxing career.

Quoting Zirin, “Words have power. Truth has power. Athletes, when they use their platform to speak truth to power, can change the world.” This is my simple shout out to the super talented Megan Rapinoe and her teammates Ali Krieger and Alex Morgan for telling it like it is to reporters and then moving on to the business at hand.

Looks like I’ll be eating my lunch and tuning in to women’s soccer for the first time in my life. 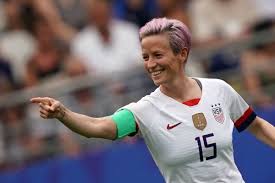 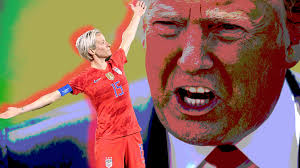 I wasn’t sure about posting it here, but I couldn’t help but admire this poster of Megan. Gorgeous.