Maybe I write my review blogs more easily because movies hold still, while the news cycle continues relentlessly. For the past three years, the daily barrage of avoidable atrocities perpetrated by the grifter-in-chief has been both infuriating and numbing. Even as I wrap my compost in past days’ newspapers, I notice an article I missed: “Trump policy change ends in bird deaths.”

Across the country, birds have been killed and nests destroyed by oil spills, construction crews and chemical contamination. In the last fifty years, the bird population in the United States and Canada has declined by 29%, or 3 billion. The endangered species director for the Center for Biological Diversity, Noah Greenwald, says that the administration’s disregard for the Migratory Bird Treaty Act and other protections, including not reporting bird deaths as required, “is not only bad for birds, but also cruel.” Cruel is a word that has been used over and over in print about this president and his henchmen, and I wonder if there is a way to make that overused word even stronger (cruelissimo?)

Which brings me back to Italy, the Vatican, and the film The Two Popes, directed by Fernanco Meirelles, who also made City of God, a powerful depiction of life and crime in the favelas of Rio de Janiero. The popes of the title are Benedict XVI (the German, Joseph Ratzinger, played by Anthony Hopkins) and Francis (Argentina-born Jorge Bergoglio, played by Jonathan Pryce). Interestingly, while the name Benedict was taken 16 times, the name of the humble, animal-loving saint, Francis of Assisi, was never chosen by a pope before 2013.

The story is an adaptation of screenwriter Anthony McCarten’s stage play about the interaction of these two prelates over several days in 2012 when Cardinal Bergoglio comes to Rome seeking permission to resign. Their fascinating and revealing conversations come from opposite ends of the Catholic church’s conservative-liberal spectrum, and could be a model for how Republicans and Democrats might positively engage today. 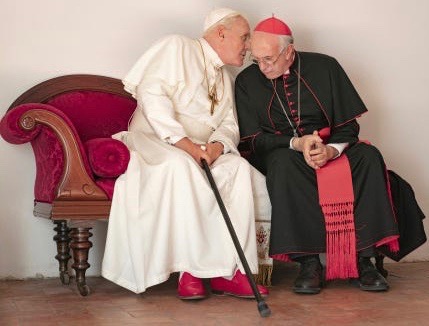 Hopkins and Pryce as Pope Benedict and Cardinal Bergoglio

We see them progressing from an awkward late night face-off after they have each dined alone (alternating close-ups on both men as they talk), to an amiable lunch of pizza and orange soda in a back room of the Sistine Chapel. Pope Benedict says grace a bit too long for his hungry companion who rushes an “amen,” but then the Hopkins character bites into his slice with the gusto of a teenage boy.

Director Meirelles expertly weaves in the backstory of future Pope Francis; the film is, in effect, a biopic of Jorge Mario Bergoglio. We watch the young man come to the realization of his priestly vocation, giving up his girlfriend but not the tango he danced with her. We witness him grapple with his role during Argentina’s “Dirty War” and struggle to protect his Jesuits from the military dictatorship. These flashbacks are both beautiful and horrifying, and help the viewer understand history’s nuances and compromises.

I won’t say more about The Two Popes except that the performances by Hopkins and Pryce are absolutely superb.

I was also pleased to learn that the current Pope has both a profound message about social justice and expertise in my favorite dance, Argentine tango.