It has been hard for me to think about anything but the testimony of Dr. Christine Blasey Ford at the Judiciary Committee, the partisan, angry reaction of the Supreme Court nominee himself, and the extremely inappropriate sputterings of the Judiciary Committee Chair and certain of his Republican colleagues. I’ve coped mainly by following the comedians. Stephen Colbert, Trevor Noah of The Daily Show and Seth Meyers have been relentlessly funny, as was Saturday Night Live.

Also intense, but heartening, was the confrontation between sexual assault survivors and Senator Jeff Flake in the elevator (“Look at me when I’m speaking to you!”) that may have accounted for the expanded FBI investigation into Dr. Ford’s sexual assault allegation. (I believe you, Christine.)

However…. the reason for today’s post is to recommend highly a 2017 film I’ve seen just recently. Mark Felt –The Man Who Brought Down the White House, starring Liam Neeson and directed by Peter Landesman, is a “biopic thriller” about the source known as “Deep Throat” who gave Washington Post reporters Bob Woodward and Carl Bernstein their inside information on the Nixon/Watergate break-in scandal. Brilliant acting, expert cinematography and high production values combine to make this a fine work of art as well as an important piece of history. 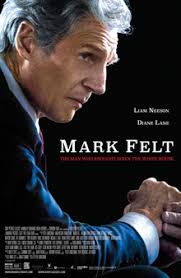 Mark Felt was living with his daughter in my own town, Santa Rosa, CA, when he revealed his identity in a Vanity Fair article in 2005. This was more than 30 years after he “blew the whistle” that helped force President Nixon’s resignation. (“I am not a crook.”)

Can those of you who stream movies see the “DVD extras”? If not, you’re being cheated, because the interview with the director of Mark Felt is full of insight and information. Peter Landesman notes, “Real superheroes are quiet and often unsung. This happens the world over. I wanted Felt to be given his proper place in history as a man trying to find a way to get the truth out. This is a story of self-sacrifice and heroism in the face of massive government corruption.”

I can only wonder about the stories that will be told about 2018 by writers and film directors decades from now.