Just when I was hoping to stay focused on my dance performance this evening, I became distracted the moment I picked up the morning paper from my driveway. “Trump pardons ex-sheriff Arpaio.” Quoting from the L.A. Times : “Arpaio, 85, was convicted in July of criminal contempt for violating a federal court order to stop racially profiling Latinos.” I know of Arpaio though his many years of lawlessness and racism in Mariposa County, which encompasses Phoenix, AZ. Even when the legal system delivered a modicum of justice for Arpaio, people of color have reason now to seek redress in other ways. Democratic representative from Arizona, Ruben Gallego, promised a big fight to wrench power from the Trump Repubs in the 2018 congressional elections.

Another headline, about the hurricane slamming the Texas coast, reminded me of the novel I could hardly continue after the first chapters; it is set circa 2074 when American descends into a second Civil War. All of Florida is under water and the “Free Southern State” consisting of “secessionist Mississippi, Alabama, Georgia and South Carolina and parts of Texas before the Mexican Annexation” are fighting the United States. Plague and presidential assassination loom in the background. American War by Egypt-born Omar El Akkad seemed a little too close to possible reality for bedtime or middle-of-the-night reading. I was especially disturbed by the fictional excerpts from history books of the future; if you’re a fan of dystopian fiction, however, you might like it.

I do recommend the novel that I started at 5 a.m. today, The Women in the Castle by Jessica Shattuck. Set at the end of WWII, it’s a “powerful and propulsive story of three widows whose lives and fates become intertwined…a nuanced portrait of war and its repercussions that explores what it means to survive, to love, and ultimately to forgive in the wake of unimaginable hardship.” I love Shattuck’s style. I could hardly stop at page 100. Also love her strong female protagonists.

And speaking of female protagonists, I could not let go by the news about Hillary Clinton’s new book, What Happened and reports that included the photograph of Trump pacing behind her at one of the presidential debates (I could never figure out how the moderators allowed him to do that). “My skin crawled…I thought about saying, ‘Back up, you creep. Get away from me!’” Clinton wrote. But of course, she didn’t speak up, even though it “may have made good TV.” As women do, she may have “overlearned the lesson of staying calm, biting my tongue, digging my fingernails into a clenched fist, smiling all the while, determined to present a composed face to the world.”

It might be fun to see thousands of women Photoshopping themselves into this image and repeating the order, BACK UP YOU CREEP. GET AWAY FROM ME. 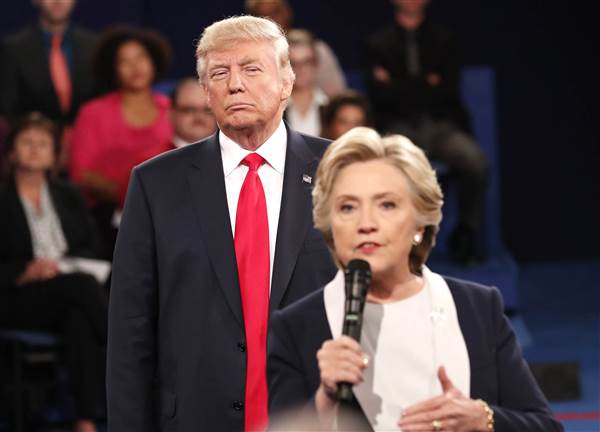